Finding out more about SACFA from Alan Dunn the chairperson

May is Cystic Fibrosis awareness month and we want to tell you more about the South African Cystic Fibrosis Association by asking Alan Dunn Chairperson of SACFA and SACFA Central Region (Gauteng) a few questions. Alan has been part of SACFA Central region since 1990, he was also part of the creation of the national SACFA body a few years later.

The regional support groups were started in the early 1980’s and these NPO’s are still active in providing support within the regions. SACFA is the umbrella body established by the regional bodies in 1990 to monitor regional developments and co-ordinate issues which need to be addressed at national level. 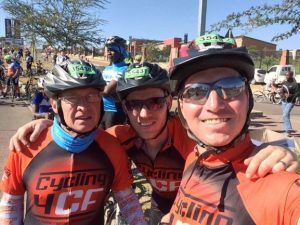 Alan Dunn with his 2 sons, while riding the 94,7 in the Cycling4CF team a few years ago

What were SACFA’s goals when it started?

The main aim of SACFA was to serve as a national body that could unite the regional associations in matters that needed to be addressed at national level, such as dealings with government and medical aids. A medical committee, MSAC was formed under SACFA, and MSAC provides advice on the best treatments available.

How have SACFA’s goals changed/evolved since its beginnings?

What role do you wish for others not in SACFA to play?

Those who have not officially joined up with SACFA can visit our website and become part of our communications networks.

What do you as Alan Dunn want to achieve with SACFA?

Social media has made our country and our world a smaller place and it is easier to communicate nationally and internationally. Regional bodies should no longer work in silos, but adopt a unified approach. Ultimately, it makes sense for there to be one NPO (SACFA) representing the entire CF community in SA. Branches in the regions would deliver support and undertake fundraising on behalf of SACFA. This would bring us in line with CFF, the foundation for the entire CF community in the USA.

How do you see the connection of SACFA to the CF community?

SACFA is our national organisation representing the entire CF community in South Africa, and we communicate to all families via social media and other suitable channels.

If you want to find out more about SACFA you may email Alan Dunn  alanfdunn@gmail.com