Jason van’t Slot, a Cystic Fibrosis warrior, extreme cyclist and professional public speaker, will be attempting to break a CF record for his Everesting attempt, while also creating awareness and raising funds for CF.

“FIENDISHLY SIMPLE, YET BRUTALLY HARD. EVERESTING IS THE MOST DIFFICULT CLIMBING CHALLENGE IN THE WORLD.”

The concept of Everesting is fiendishly simple: Pick any hill, anywhere in the world and cycle repeats of it in a single activity until you climb 8,848m – the equivalent height of Mt Everest.

Whether you are climbing toward a historic measurement – or an updated number that has moved a few inches (8848.86m) – the goal remains the same; take on a big challenge in life, and fight like hell.

Why is this such a special event?

Jason will be the second person in the world with CF to attempt this record and will be aiming to beat it. The first CF person to complete this challenge did so only on their second attempt, after gaining access to Trikafta.

In addition to this Jason will also be raising funds to help SA Cystic Fibrosis Association (SACFA) facilitate access to life-changing drugs such as Trikafta, which are not yet available in South Africa. Trikafta is a drug which corrects the way the defective CF gene functions. It has helped CF patients to come off the transplant lists, and even helped some to breathe without oxygen for the first time, within months of starting treatment.

The funds raised will also go towards maintaining an updated South African CF registry, which provides statistical data on CF patients necessary for negotiations with Vertex Pharmaceuticals and other stakeholders, including medical aids and the South African Health Department.

How can you get involved?

Jason will be involved in a live online event with The Big Positive Guy on Thursday 11th February at 7pm where you can listen in to find out more about him and his Everesting goal! This venture is an amazing opportunity to create awareness for CF in South Africa, raise funds towards gaining access to Trikafta and maintaining the registry, as well as showing the CF community as a whole that we are capable of great things. What a great opportunity to come together as a CF community to support something truly momentous!

Click here to watch the event from 11th February 2021 to see Jason launch his speaking career and explain more about his Everesting attempt! 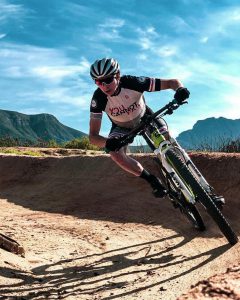 For more info or to donate, click here: https://www.givengain.com/cc/everest-challenge-to-breathe-life-into-cystic-fibrosis-lungs/

‘Living with cystic fibrosis challenges one daily, I believe one must rise up to these challenges, manage your approach to living with a life-threatening lung condition, breathe in life and face these challenges with your head held high and be proud of the way you lived your life. I never chose to have a life-threatening condition. But I choose to be a victor, and not a victim of the disease’ – Jason van’t Slot